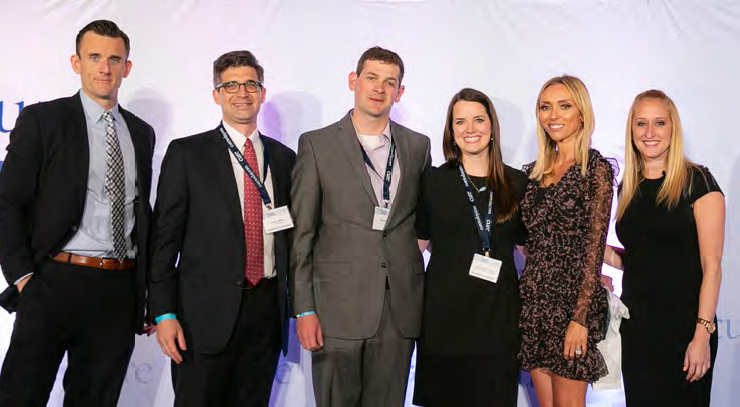 Generosity is the thread that tied together the 3 oncology nurses honored in CURE®’s 2019 Extraordinary Healer® contest. Two finalists and a winner were recognized in April for giving more time and effort than their jobs demanded to support their patients, colleagues, and institutions.

In essays by patients, colleagues, and family members, these nurses and 51 others were cited for going above and beyond the call of duty by offering life-changing compassion, expertise, and helpfulness.

Caitlin Cohen, MSN, RN, CPNP-AC, CPHON, a nurse practitioner at the University of Chicago Medicine Comer Children’s Hospital, in Illinois, was declared the winner and received a trip and spa package to Miami Beach, Florida. The ceremony was held in conjunction with the Oncology Nursing Society’s 44th Annual Congress in Anaheim, California, and featured a keynote address by Giuliana Rancic, an entertainment journalist, author, entrepreneur, fashion designer, and beauty expert—and a survivor of breast cancer.

As a nurse practitioner for children facing bone marrow transplants, Cohen supports and advocates for patients and their families. At the Extraordinary Healer® event, her fellow oncology nurses were moved by stories of how she goes above and beyond for those patients. In one case, she provided high-calorie protein and vitamin drinks for a malnourished young man whose mother was having trouble affording food—all the while letting the family think the hospital was providing the supplements. In another example, Cohen spent a lot of extra time over 6 months lending a supportive ear to a patient whose depression and anxiety made it difficult for her to cope with a bone marrow transplant. Cohen also became an integral support for one family that suffered a lot of loss in a short period of time, taking time outside of her work hours to be there for them.

Barbara Bittner, RN, OCN, of AdventHealth in New Smyrna Beach, Florida, and Charlene’s Dream in Daytona Beach, Florida, a finalist, was recognized for her efforts as a volunteer while continuing to put her patients first in her job as a nurse navigator. Bittner cofounded Charlene’s Dream in 2015. The nonprofit organization, which provides education and support to local women with cancer, was founded in honor of fellow nurse navigator Charlene Brady, who died of cancer but had envisioned such a facility. Bittner was praised for running an arts therapy group there for a year and then a satellite support group. For a while, her nominator pointed out, she was regularly driving 25 miles out of her way to pick up a support group member who needed transportation to meetings.

Angela Hammack, BSN, RN, OCN, a charge nurse and clinical educator with Jackson Oncology Associates in Mississippi, was cited for turning her passion for running into a way to honor those she takes care of and for raising over $100,000 for cancer research and patient support. In one instance, in 2017, she trained for 5 months to run a 100-mile course, which she completed in 29 hours, 36 minutes, and 2 seconds. Hammack works to support Hope House of Hospitality, which provides a place for those who travel for treatment; the Cancer League of Jackson, which raises money for the American Cancer Society; Susan G. Komen; and the American Lung Association. She has worked on oncology legislation at the national and state levels, including helping with the passage of an oral parity law.

Michael J. Hennessy, Jr., president of CURE Media Group, said the event is one of his favorites because it recognizes “so many passionate people who truly care about what they do and the patients they affect daily.” Having accompanied his mother to chemotherapy treatments, he added, he’s witnessed the fact that oncology nurses listen, care, and are nurturing and patient.


Rancic, perhaps best known as a solo anchor and managing editor for TV’s E! News, discussed her cancer journey, which started as she faced infertility.

While embarking on a third round of in vitro fertilization in 2011, a nurse named Kelly told Rancic she needed to have a mammogram— even though she was 36, had no family history of breast cancer, and was healthy. The reason was that, in case she had estrogen-driven breast cancer, pregnancy could fuel the disease.

Soon thereafter, Rancic was shocked to learn she had exactly that disease. A lumpectomy failed to remove all the cancerous tissue, so she opted for a bilateral mastectomy—after which she and her husband had a son with the help of a surrogate. Without Kelly, Rancic said, she doesn’t know if she’d be alive today.

Rancic recalled another oncology nurse, Jessica, who caught her trying to flee the hospital as she waited to hear if she had cancer. Jessica calmed her down and stayed with her until she received the diagnosis. She also gave Rancic useful advice by encouraging her to think of questions she wanted to ask the oncologist and bring them in writing to her next appointment, so that fear and emotions wouldn’t cause her to forget them. Since then, Rancic has shared that same advice with thousands of women.

Rancic went public with her breast cancer journey on the reality show Giuliana and Bill “because you never know what sort of impact you can have; you could save or change a life,” she said. “The best I could do was to be honest and share and let others know that if it could happen to me, it could happen to anyone.”

She told the audience, “With what you do each and every day as oncology nurses, you have that exact same power, and so much more. The impact you have on the people you meet is lifechanging. We don’t ever forget you. You stay in our hearts forever, and I am proof of that.”

Rancic, who is now 7 years cancer free, created Fab-U-Wish in 2013. It’s a program to grant fashion, beauty, and celebrity-themed wishes to women battling breast cancer. Her other charitable initiatives include helping to support The Pink Agenda and the Breast Cancer Research Foundation.


Cohen and Bittner were nominated by colleagues, while Hammack was nominated by a caregiver— the daughter of one of her patients. The 3 have joined more than 1000 nurses nominated since the inception of the Extraordinary Healer® Award for Oncology Nursing in 2007. Finalists and their nominators have included men and women, adults and children, representing a variety of cancer centers and hospitals.

Each nominee took the stage with her nominator, who then read her essay aloud. Cohen was nominated by James LaBelle, MD, PhD, also from Comer Children’s Hospital. “Caitlin had been a floor nurse for another stem cell transplant program, so I knew that she had the skills to be a transplant nurse, taking care of some of the most ill patients with some of the most complex conditions in the hospital,” he wrote. “What I didn’t know about at the time was her exquisite talent in not only taking care of the medical needs of patients but also advocating for them and their families, as well as her ability to heal spiritually. She embodies the reason that every clinical provider goes into medicine in the first place.”

Bittner was nominated by Dianne Rohald, a colleague at both AdventHealth and Charlene’s Dream. “If you Google ‘team player,’ you will find descriptions such as the following: someone who adapts quickly to new situations, avoids office politics, focuses on team goals, appreciates others’ work styles, and celebrates peers’ successes,” Rohald wrote. “These all perfectly describe Barb.” Hammack was nominated by Cora Beth Hartfield. “Let me just speak freely from the heart about my friend, who has given more to me and my family than I could imagine,” Hartfield wrote. “She ultimately took the journey with us, as most oncology nurses do, sometimes without even knowing it. She stood by us during the 5½ years that Mother battled through 16 different chemotherapy regimens, and Angela was there toward the end of life when Mother was no longer able to continue fighting. She went the distance with Mother, like she has done with so many of her patients. Today, she, along with others at Jackson Oncology Associates, continue their brave and worthy nursing responsibilities, as they are caring for my mother’s brother, my uncle Robert K. Pierce, who is battling colon cancer.”


The event was sponsored by the pharmaceutical companies Bristol-Myers Squibb, Amgen, and Janssen. Part of the evening included a tribute to the late Kathryn West, MSN, RN, OCN, an oncology nurse who served as advocacy director at Amgen and died last year of colorectal cancer at age 55. She played a pivotal role in the launch and success of Amgen’s Breakaway from Cancer program, which shares resources with patients, from prevention through survivorship, and was instrumental in attracting actor Patrick Dempsey as one of its ambassadors.

The actor said that his Dempsey Center in Maine, which provides supplementary cancer services for free, would not have existed without West’s support.

Lunden recalled a twinkle in West’s eye, “which was her passion for the fight against cancer and to try to improve the lives of people with the disease.” She urged the audience, “Go out there, and carry on her legacy.”