Analysis Shows HPV Vaccine Not Associated with Infertility in Women

A new retrospective cohort found that women who had received the human papillomavirus vaccine had similar rates of primary ovarian insufficiency as unvaccinated women.

A recent analysis showed that the human papillomavirus (HPV) vaccine was not associated with primary ovarian insufficiency, according to a new retrospective cohort from the Danish vaccination register.

Girls and women who received 4 doses (4HPV) of the vaccine showed no significant different in primary ovarian insufficiency compared with women who were unvaccinated.

“The HPV vaccines are cancer-preventing vaccines, and, thus, the lackluster uptake in many countries is disheartening,” wrote Anders Hviid, DrMedSci, Statens Serum Institut and Emilia Theissen, MSc, University of Copenhagen, in a corresponding paper. “Our study provides much-needed support for the ovarian safety of the 4HPV vaccine, which is of key importance for clinical and public health personnel when addressing parental concerns about fertility issues associated with vaccination. There is currently little evidence for an association between 4HPV vaccination and primary ovarian insufficiency. On the contrary, the vaccine protects against infections that may decrease fertility.”

Estimate hazard ratios were measured through the cox proportional hazards regression and adjustments for age, calendar periods, and propensity scores summarized health care use. The investigation began in October 2020 and concluded in January 2021.

A 4HPV vaccine (Gardasil) was introduced to Danish childhood immunization schedules in January 2009. Previously, girls older than 12 years had been offered a 3-dose vaccine schedule. Starting in October 2008, girls between the ages of 13 to 15 were offered a “catch-up” vaccine. By August 2012, the “catchup” vaccine was also available to women between 20 and 27 years of age. In February of 2016, the 4-dose vaccine was replaced with a bivalent vaccine (Cervarix, GlaxoSmithKline).

Primary outcomes were contacting hospitals for primary ovarian insufficiency and were measured through hazard ratios comparing vaccinated and unvaccinated individuals.

Receiving an HPV vaccination that was not a 4-dose vaccine was marked as a censoring event, as were diagnoses of cancer or carcinoma in situ, hypogonadism after ovarian treatment, or major surgical procedures on the genitalia.

Forty-five individuals received a diagnosis of primary ovarian insufficiency which proceeded to be an amenorrhea or oligomenorrhea diagnosis. Researchers re-estimated the HR of these individuals and determined an adjusted HR of 1.32 (95% CI, 0.73-2.38). A further sensitivity analysis accounting for a lack of menarche data revealed an adjusted HR of 1.03 (95% CI, 0.58-1.83).

“The main strength of our study is the use of a nationwide cohort of girls and women with independent ascertainment of exposure and outcome status,” concluded the study authors. “Our study is the largest to date of 4HPV vaccination and primary ovarian insufficiency diagnosis, with 144 individuals, including 54 vaccinated individuals. It is the first, to our knowledge, to evaluate a composite outcome of oligomenorrhea and amenorrhea in a cohort study.”

The authors acknowledged certain limitations that merit consideration in future studies. First, researchers did not have access to the symptom onset date, and they speculated that there was likely delay between symptom onset and diagnosis. They also noted that individuals would likely be diagnosed with primary ovarian insufficiency beyond the years of the analysis.

Because the study did not include information on menarche, some of the younger individuals included in the analysis may not have been at risk during the allotted follow-up period. Finally, the study did not include information about oral contraceptive use, which may prolong time to or even decrease risk of primary ovarian insufficiency diagnosis. The authors acknowledged that this could potentially mask an increased rate. 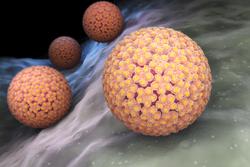