Though the video did not have a statistically significant impact, those assigned to watch the video appeared to be more informed about hospice care and reported more favorable perceptions of hospice.

A randomized trial of a hospice video educational tool for patients with advanced cancer, as well as their caregivers, found that those who were assigned to watch the video appeared to be more informed about hospice care and reported more favorable perceptions of hospice.

In addition, having watched the video was associated with an increase in hospice use and hospice length-of-stay.

“These findings are particularly relevant given the suboptimal use of hospice care noted among patients with advanced cancer,” the authors wrote.

The primary outcome was patient preference for hospice. Key secondary outcomes included patient and/or caregiver knowledge and perceptions of hospice, as well as hospice use.

Importantly, following the video or verbal intervention, there was no significant difference noted concerning patients' preferences for hospice (86.7% vs 82.7%; P = 0.651).

“It remains unclear how the hospice video led to substantial differences in rates of hospice use without significantly impacting patients’ preferences for hospice care,” the authors wrote. “Future studies should examine the impact of the hospice video on the frequency and timing of hospice discussions as a potential mediator for higher use of hospice.”

With regard to the caregivers, those who were assigned to watch the video were more likely to prefer hospice for their loved ones (94.4% vs 65.4%; P = 0.031), reported greater familiarity with hospice care (9.7% vs 8.0%; P = 0.001), and were less likely to affirm that hospice is only about death (0.0% vs 23.1%; P = 0.066). Researchers suggested that because of the critical role caregivers may play in decision making regarding hospice, future studies of hospice educational tools should enhance efforts to enroll caregivers.

“Although prior studies have focused primarily on the early involvement of palliative care and other interventions targeting physicians and health care systems to increase hospice use, the findings of the current study have highlighted the value of a simple and inexpensive video to educate patients and families about hospice,” the authors wrote. “A hospice video represents a potentially scalable intervention targeting the informational needs of patients with advanced cancer and their caregivers to overcome barriers to hospice use.”

Of note, the research assistants who were collecting participant-reported outcomes were not blinded to the randomization, which may have introduced bias. Even further, some patients refused to participate in the study because they did not want to discuss hospice, which may have introduced a selection bias. Additionally, the investigators lacked data with which to compare characteristics between participants versus nonparticipants.

“Given the potential for this scalable and low-cost intervention to improve hospice use, and thereby improve the quality of EOL care and reduce EOL care costs, a future multisite trial to confirm the efficacy and generalizability of this intervention across care settings is warranted,” the authors concluded.

This article originally appeared on CancerNetwork. 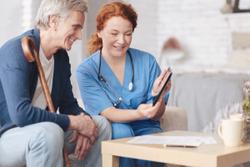