Older patients with diffuse large B-cell lymphoma (DLBCL) often have an increased risk of treatment-related morbidity and mortality, but the use of preventive interventions, such as granulocyte colony-stimulating factor (G-CSF) may help.

Since older patients with diffuse large B-cell lymphoma (DLBCL) are known to have an increased risk of treatment-related morbidity and mortality, researchers conducted a retrospective study to quantify this risk and identify the factors associated with mortality and serious morbidity during the first cycle of immunochemotherapy.

Adam Olszewski, MD, an assistant professor at Brown University, and coauthors noted that 1 in 45 older patients treated with immunochemotherapy for their DLBCL die during the first month of treatment, and 25% are hospitalized. Thus, knowing the risk factors for this mortality and morbidity offers an opportunity to improve preventive interventions, including identifying patients who would benefit from granulocyte colony-stimulating factor (G-CSF).

Patients for this study were chosen from the Surveillance, Epidemiology and End Results (SEER) registry if they were at least 65 years of age and had Medicare claims, a diagnosis of DLBCL between 2003 and 2011, and received rituximab-based immunochemotherapy. The therapy was defined as R-CHOP—like, consisting of rituximab, cyclophosphamide, and vincristine in combination with doxorubicin, mitoxantrone, or etoposide.

Risk factors for death and hospitalization within the first 30 days (early mortality) of treatment were analyzed using multivariable logistic regression models. G-CSF use was also assessed.

A total of 5530 patients were analyzed; they had a median age of 76 years, and 94% had received R-CHOP—like regimens containing doxorubicin. The cumulative incidence of early mortality was 2.2%.

Characteristics associated with an increased risk of early mortality were age ≥75, lymphoma-related symptoms (B symptoms), chronic kidney disease, poor performance status, use of mobility aids, hospitalization within the past year, and upper endoscopy within the past year.

Patients with ≤1 of these risk factors had a low risk of early mortality (0.6%), whereas those with ≥4 risk factors had a risk of 8.3%. In the high-risk group, this was mitigated by receipt of G-CSF, which lowered the early mortality risk 3-fold. However, only 66% of patients in this study received G-CSF during the first cycle. The cumulative incidence of hospitalization in the first 30 days was 23.5%, with the highest frequency occurring at day 8.

In addition to quantifying early mortality risk, the study also highlighted the importance of G-CSF use in this elderly population, and demonstrated that this intervention may be underused. The information gained from this study could be used not only to stratify risk but also to improve outcomes in this patient population. 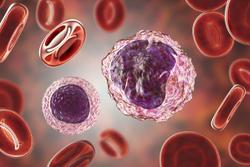