As the intensity of treatments for childhood cancer drop, so does the rate of severe long-term side effects in these patients.

The rate of severe long-term side effects caused by treatments for childhood cancers is dropping over time, according to findings from a retrospective analysis of 23,600 survivors enrolled in the Childhood Cancer Survivor Study.

Due to advances in curative therapy, supportive care, screening, and early detection, the rate of serious late effects 15 years after diagnosis of a childhood cancer was lower in the 1980s than it was in the 1970s, and it dropped yet again in the 1990s.

The results, generated by researchers from a host of cancer hospitals across the United States, were presented June 2 at the 2017 ASCO Annual Meeting.

Rather than being evenly distributed across cancer types, however, these gains were seen only in patients treated for certain cancers.

The authors embarked on the study because they knew that survival rates after childhood cancer had improved, and wanted to determine whether treatment advances had also contributed to a decline in the incidence of chronic disease in survivors.

In fact, the 5-year survival rate after a diagnosis of cancer at ages 0 to 14 has risen from 58% in the 1970s to 84% today, ASCO said in a press release. There were 420,000 survivors of childhood cancers in the United States in 2013, and that number is expected to exceed half a million by 2020, noted study lead study author Todd M. Gibson, PhD, an assistant member at St. Jude Children’s Research Hospital in Memphis, Tennessee.

ASCO said that a previous report from the Childhood Cancer Survivor Study indicated that changes in treatment over 3 decades had cut the chances that childhood cancer survivors would die from the late effects of therapy by 6.4%, or about half.

Still, more than half of 5-year survivors of childhood cancers develop at least 1 serious or fatal late effect by the age of 50, the researchers reported.

“Our analysis marks the first comprehensive assessment of changes in the rates of chronic health complications over time in a large group of cancer survivors,” Gibson said. “From our findings, it is clear that survivors diagnosed and treated in more modern treatment eras are doing better. Not only are more children being cured, but they also have lower risk for developing serious health problems due to cancer treatment later in life.”

Median age of survivors in the study was 28, and they were a median 21 years from diagnosis. Researchers asked survivors to report their experiences in a survey, and searched the National Death Index for survivors who had died due to health conditions arising from childhood cancer treatment.

Researchers found that each cancer type was associated with its own specific outcome when it came to changes in the rate of late effects. Over the 3 decades included in the survey, and among patients at least 15 years past their diagnosis, the investigators found that the rate of serious late effects decreased from:

Researchers credited the reductions to decreased treatment intensity. However, they did not find any decline in the rate of late effects for survivors of other childhood cancers, including neuroblastoma, acute myeloid leukemia, soft tissue sarcoma and osteosarcoma.

The incidence of heart and lung problems, however, did not drop during the study period. The 2015 Childhood Cancer Survivor Study that found a reduction in deaths from late effects of childhood cancer treatment did detect small decreases in the frequency of fatalities due to cardiac and pulmonary issues. However, that study looked strictly at deaths due to late effects, not the overall incidence of the health conditions in the study population.

“We were a little surprised that the incidence of severe cardiovascular disease did not decrease, knowing that deaths from cardiovascular disease dropped among survivors in recent decades,” Gibson said. “This is a reminder that survivors continue to have an increased risk for serious health problems compared to the general population and need to be followed closely.”

Next steps for the researchers will involve closer study of specific health conditions in survivors of childhood cancers and longer-term follow-up that will shed light on the intersection of late effects with aging.

“Perhaps no other area of oncology has seen such dramatic progress in treatment over the past decades as childhood cancer,” said ASCO subject expert Timothy D. Gilligan, MD, MSc, associate professor of medicine at the Cleveland Clinic Taussig Cancer Institute. “These results show how important it is to fund and conduct studies of cancer survivors.”

The analysis was funded by the National Institutes of Health. 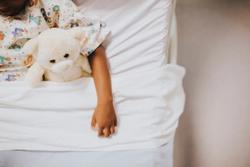