Ovarian cancer expert, David M. Gershenson, MD, from University of Texas MD Anderson Cancer Center discusses thre treatments for some of the rare types of ovarian cancers and the challenges to treating these diseases.

With smaller patient populations in rare cancers, it can be difficult to conduct clinical trials. This can make advances in this field rare as well. Rare ovarian cancers are no exception to this trend.

In an interview with Oncology Nursing News, David M. Gershenson, MD of University of Texas MD Anderson Cancer Center discusses the treatments available for some of these rare types, as well as what the future could look like.

Oncology Nursing News: Can you tell me a little about the rare types of ovarian cancer and what is important to know about them?

I think one of the main takeaways is that there are challenges and barriers to studying rare ovarian cancer. There are many fewer cases and it's very difficult to conduct clinical trials because there are fewer patients. It sometimes can take a long time to accrue patients on a clinical trial. There is not a lot of federal funding for trials of rare cancers in general, and there's as much emphasis on it. The pharmaceuticals are not that interested, for obvious reasons related to revenue. So there are many challenges in trying to make advances in the study of ovarian cancers that are rare.

Also, some of these rare ovarian cancers have a number of very interesting genetic or genomic abnormalities. Unlike high-grade serous carcinoma which is the most common type, which has many abnormalities that are difficult to treat. These types have fairly specific genomic aberrations that can be, in some cases, treated with targeted agents. I think that the emphasis over the past few years, and in the next decade, will be on targeted agents, combinations of targeted agents, and, in some of these rare tumors, hormonal therapies. For instance, for granulosa cell tumors, a type of sex cord stromal tumor, as well as low-grade serous cancers, these are relevant. There are many different targeted treatments and new treatments that we'd like to study, but again it gets back to the challenges that we have in conducting clinical trials.

What are the current treatment options for a patient with one of these rare ovarian cancers?

It varies. For low-grade serous carcinoma, there have been first generation trials of MEK inhibitors. MEK is a gene that occurs in the MAP kinase pathway and we know that there are mutations of KRAS and BRAF that occur in that pathway. There have been a number of trials of these targeted agents, these MEK inhibitors: one has been completed, three have been done in the second-generation, the last of them is finishing accrual later this year. That's one major area of research.

Clear cell cancer is another area where there are a number of aberrations in the pathways so ARID1A mutations occur in about 50% of patients' tumors. PI 3-kinase, AKT, mTOR abnormalities occur in about a third of these tumors. There's a great opportunity to study targeted agents in that area. There have been some trials and there will be future trials as well.

Do these rare types have symptoms or effects on the body that differ from the most common type?

No. Most of these rare ovarian cancers have symptoms that are not really differentiated from women who have the most common type, which is high-grade serous. Abdominal pain, bloating, those kinds of symptoms occur at the time of diagnosis.

Some of the patients with certain types live a very long time, because the diseases are indolent. That would be true for granulosa cell tumors as well as low-grade serous carcinomas. These patients may experience side-effects from treatment. It all is related to quality of life that they may have. Not only from the cancer, but from the many treatments.

One of the areas where we're really reducing the amount of treatment is a success-story with malignant ovarian germ cell tumors. The average age at diagnosis is about 16 and up until the 1970s, most girls and women who have this type died of their disease. We had no good therapy. The introduction of Platinol (cisplatin) in the late 1970s completely transformed that area. Now the cure rate is 95%. However, these girls and women experience some of the side-effects of chemotherapy. Now, there's a big move, and a recent clinical trial, that focuses on reduction in the surgical treatment of germ cell tumors, as well as trying to completely get rid of chemotherapy in some patients, who have early-stage disease.

Sixteen is a very young age to encounter cancer. Can you discuss some of the specific concerns for those patients?

Late-effects and fertility are the two major concerns. Fortunately, for instance with germ-cell tumors and granulosa cell tumors, they are almost always unilateral, they only affect one ovary. In almost all of these patients, you can preserve a normal contralateral ovary and uterus, so you preserve their fertility. However, if the patients does receive chemotherapy, there's about a 15% rate, or frequency, of acute ovarian failure, making them infertile.

Most young patients are able to preserve their fertility. We’ve conducted studies to show that many of these young patients can go on to have normal pregnancies and normal offspring. That's good news. Once we start to reduce the amount of chemotherapy we're using in these patients, that will be even better, because then we won't have to face that 15% frequency of acute ovarian failure.

A big concern for many patients with ovarian cancer is the high-rate of recurrence. Does that apply to these rare types?

It is, unfortunately. All three of the rare epithelial types: clear cell, mucinous and low-grade serous are not very sensitive to the standard chemotherapy, which is typically Abraxane (paclitaxel) and Paraplatin (carboplatin). The recurrence rate in all three of those tumors are high, in the 70% range.

Fortunately, low-grade serous carcinoma, despite its insensitive to chemotherapy, is an indolent disease, as is granulosa cell. Patients can still live for many years. Clear cell and mucinous are fairly aggressive types. When they recur, they're very difficult to treat.

Is there anything else you’d like to say about these rare types of ovarian cancer?

We need a grass-roots advocacy movement to lobby not only Congress but the National Cancer Institute to put more emphasis on rare cancers, specifically rare ovarian cancers. That would be my plea. The only way we're going to advance treatments is to conduct clinical trials that prove that one treatment is better than the other. We really need the help of our advocates in that fight. 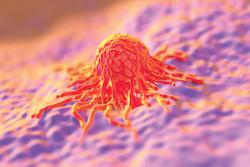