Though having a high body mass index (BMI) is associated with a higher risk for colorectal cancer, patients who are thinner may not do as well after treatment for metastatic colorectal cancer (mCRC), according to new research reported at the recent 2015 World Congress on GI Cancer.

“Contrary to our hypothesis, patients who had the lowest BMI were at risk for having the shortest survival,” said lead author Yousuf Zafar, MD, associate professor of medicine at Duke Medicine. “In this case, patients with the lowest body weight—people who had metastatic colon cancer and a BMI of less than 25—were at the highest risk.

"This effect persisted after adjusting for study, age, ECOG performance status, gender, and hypertension. We did not see any relationship between BMI and progression-free survival.”

The results surprised researchers, who expected obese patients to respond more poorly to treatments for Stage IV colorectal cancer due to their increased risk of developing the disease and having it come back. Additionally, there is some evidence that many obese patients also receive less-than-optimal doses of cancer drugs, or have other health problems that complicate recovery.

According to guidelines, a healthy adult’s BMI ranges from 18.5 to 24, whereas a BMI below 18.5 is considered underweight.

Researchers examined data pooled from 6128 patients in the United States and Europe who had previously been untreated for their mCRC and who were included in four different registry studies. Their average BMI at the start of cancer treatment was 25.3, considered slightly overweight, and all patients received bevacizumab with chemotherapy in their treatment.

“I see this study as hypothesis-generating and a basis for a randomized, controlled study,” said Zafar during a question and answer session.

The role of high BMI has only recently been evaluated in mCRC, revealing obesity as a risk factor for developing colon cancer. Also, patients with BMI at both the lowest (<18.5 kg/m2) and highest (≥35 kg/m2) levels have been shown to be at higher risk for earlier disease recurrence following adjuvant chemotherapy for colon cancer.

“Although high BMI has been associated with increased risk of colorectal cancer, little is known about how BMI impacts outcomes for patients already diagnosed with mCRC,” remarked Zafar.

“It’s possible that the lowest weight patients may receive adequate first-line treatment but then are too sick to receive subsequent lines of therapy. That may be where we can focus more attention on improving their outcomes.” 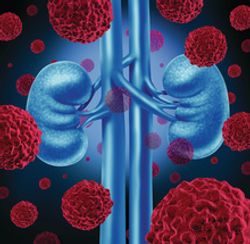