Dr. Brian I. Rini from the Taussig Cancer Institute Describes Axitinib's and Sorafenib's Side Effects

Lead investigator Brian I. Rini, MD, a staff member in the Department of Solid Tumor Oncology at the Taussig Cancer Institute at Cleveland Clinic in Ohio looks at the 3 main categories of side effects found in the AXIS 1032 phase III trial comparing axitinib to sorafenib in the second-line setting for metastatic renal cell carcinoma (mRCC) which found that axitinib's side effects were more manageable and less bothersome than the sorafenib side effects.

Dr. Rini says the side effect profile generally fell into three categories and there were some that were more common with axitinib that were considered on target, VEGF inhibition effects. High blood pressure has been a classic response to the agents, especially the more potent agents. There was a group of side effects that appeared roughly equivalent between the arms. These included things like fatigue, diarrhea, and GI side effects. The three side effects that were more common in sorafenib patients were hand-foot syndrome, rash and alopecia. Dr. Rini says different patients will have different benefit and also different toxicities, which is part of the equation of approaching patients. 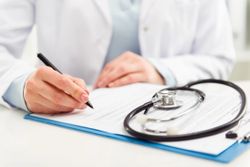