Underscoring the need to raise awareness among oncology nurses of the importance of adhering to safety precautions when administering chemotherapy and other hazardous drugs, the NIOSH has awarded a $2.3 million research grant to identify exposure risks and promote strategies to combat them.

Underscoring the need to raise awareness among oncology nurses of the importance of adhering to safety precautions when administering chemotherapy and other hazardous drugs, the National Institute for Occupational Safety and Health (NIOSH) has awarded a $2.3 million research grant to identify exposure risks and promote strategies to combat them.

The 4-year study, under the auspices of the University of Michigan School of Nursing and Comprehensive Cancer Center, will involve more than 300 nurses at 11 of the nation’s leading cancer centers. Under the program, nurses will:

1. Provide information concerning chemotherapy spills in the clinic and provide blood samples to determine whether the agents are detectable.

2. Receive an educational module on safe drug handling to increase the number of nurses who use protective equipment on a consistent basis.

“Nurses are the single largest group of oncology care providers,” stressed Christopher R. Friese, PhD, RN, AOCN, FAAN, an assistant professor at the University of Michigan School of Nursing who will be leading the new DEFENS: Drug Exposure Feedback and Education for Nurses’ Safety study.

Friese has spearheaded or participated in a number of studies examining the problem of antineoplastic drug exposure among oncology nurses—shining a spotlight on a 30-year-old problem of adherence to hazardous drug safety guidelines this new NIOSH grant seeks to address. He is the lead author on a pilot study published recently in the journal Cancer Nursing1 examining antineoplastic drug exposure at a high-volume ambulatory infusion center.

In this study, oncology nursing personnel were asked to complete a survey after a drug spill event and also provide urine samples over an 8-hour period following the spill. Samples were also obtained from participants who did not experience a spill.

Over the course of the 6-month study period, four respondents reported spills involving etoposide, cisplatin, pemetrexed, and docetaxel; all happened in the patient care area (with three occurring in the most congested area of the center) and ranged from 5 mL to 70 mL. Sixty percent of study participants expressed either no or a low level of concern about the spill, and use of personal protective equipment by the study participants was low.

The researchers found detectable levels of drugs in the samples of nurses both with and without a reported drug spill event and noted that surface contamination in the infusion area likely explains this finding due to residue from old spills or faulty handling practices. This, Friese said, was among the most significant implications of the study during a recent interview with Oncology Nursing News:

“The properties of a lot of these drugs lead them to stick to floors, to chairs, to countertops, and we have to really think about how we’re handling them in between patients that can lead to potential surface contamination.”

Another important takeaway from this study, he said, though not statistically significant, was that spills were more common for more experienced nurses. “This suggests their level of vigilance may be lower, because they’ve been doing this for so long.”

Finally, although again not reaching statistical significance due to the small sample size, “we saw a trend that the work environment for nurses appears to matter: when nurses reported higher workloads and lower performance on safety behaviors that promote patient safety, spills were also higher.”

Friese noted that the pilot study findings did yield significant policy and practice changes. “That’s been very rewarding, because the nurses now have a deeper understanding of their personal and collective risk, and what we see them doing is taking ownership of the problem and really making changes to their individual and collective practice to improve safety.” For example, all staff members have increased their use of double gloves when handling antineoplastic drugs, and the institution stopped the practice of reusing impermeable gowns.

Capturing more insight on these issues via a large, multicenter study, is a central objective of the new NIOSH grant, Friese explained. “Over 20 million doses of chemo are given annually in infusion centers. We believe the data gathered from this study can be used to inform practice and make policy changes that will improve the safety of a large number of healthcare workers.” 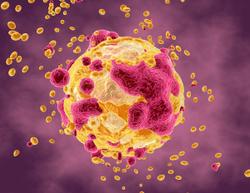