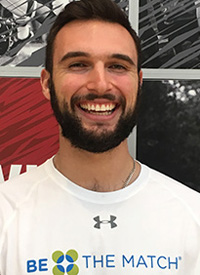 At first, Jacob Gribb dismissed the phone call as a prank by his football teammates at Villanova University.

His stem cells looked like a good match for those needed by a 30-year-old man with leukemia, he was being told. Was he still willing to donate?

As it turned out, the caller really did represent the nonprofit organization Be The Match, the world’s largest and most diverse registry of potential donors of healthy stem cells for transplant. Donations can treat thousands each year who have leukemia, lymphoma, sickle cell anemia or a disorder that leaves patients with no functioning immune system.

Gribb, now 23, was happy to help, undergoing some basic testing to make sure he was healthy. After that, the Pottstown, Pennsylvania resident took five days’ worth of injections to boost his stem cell count and then spent seven hours in a hospital bed in September 2015, sleeping and watching TV, as blood was drawn out of one of his arms, cleared of stem cells and infused back into his other arm. All in all, not such a taxing experience, he says, for a procedure capable of saving a person’s life.

Logically, Gribb knew the meaning of his gift, but its gravity didn’t register with him right away. “I told my mom, and she was more excited than I was,” he says.

It was only after all the stem cells had been collected and Gribb returned home, physically and emotionally drained, that he was able to appreciate the meaning of what he had done. “It’s an emotional process,” he says, “because you’re giving someone a part of you so they can live.”

Although people can donate until they reach the age of 61, Be The Match is looking for more young men like Gribb.

Men under 30 are typically at their healthiest, and because they tend to be larger than women, they can produce more stem cells, says Mary Halet, a community engagement director for Be The Match. Furthermore, donations from men are associated with a lower rate of graft-versus-host disease (GVHD), which occurs when a patient’s body recognizes donated stem cells as foreign and attacks them. That’s because women who have been pregnant carry antibodies that can spark GVHD — a condition that, while treatable, tends to stay with stem cell recipients for the rest of their lives, Halet says.

Be The Match is reaching out to young men through its “Be the Guy” campaign, using its website, where men can register online to donate stem cells; social media; and “a lot of in-person, on-campus activities,” Halet says.

Villanova, for instance, is one of nearly 80 college football teams across the country that has been tapped by Be The Match as a base of potential donors.

Some team members also serve as volunteers who teach other students about the opportunity to join the registry by undergoing a simple cheek swab that remains on file; this database is routinely searched for donors whose human leukocyte antigens — proteins found on cells — match those of patients in need. One in 40 of the people whose swabs on file are called in for testing to confirm a potential match and undergo a health check; one in 500 of those go on to donate, Halet says.

On Gribb’s football team, two other players donated stem cells around the same time he did. Be The Match found the donors through the team’s football coach, Andy Talley, who retired recently but remains involved in supporting the work of Be The Match through his Pennsylvania-based Andy Talley Bone Marrow Foundation. Over the years, Talley was instrumental in enlisting the support of all the other colleges and universities whose football teams work with Be The Match.

“Coming in as freshmen, he had everyone (on the team) get a cheek swab for the database, and he ran the campus-wide bone marrow matching through cheek swabs,” Gribb says. “He kept saying that it’s such a rarity to get a match, but that you could save someone’s life doing this.”

Talley thought that idea was especially important for his football players — big men on campus — to embrace.

“His big phrase was always that it’s nice to be important, but it’s more important to be nice,” Gribb recalls. “He said, ‘People are always going to look up to you, so make sure you’re always nice. You’re not sure who’s watching you, so be grateful and humble for what you have in life.’”

Talley’s efforts to link young men with Be The Match help the players become well-rounded human beings, Halet says. “He sees how this really turns these young men into contributing members of society and allows them to realize that the world is a lot bigger than Facebook,” she says. “They have an opportunity to make a difference."

Gribb obviously absorbed Talley’s message. When a friend from his hometown who was battling leukemia called to compliment him for being brave enough to become a donor, “I thought to myself, ‘Honestly, I just got a call and proceeded with the process. You’re the one every day who’s battling for your life,’” Gribb recalls. “These people are the true heroes I look up to.”

The process really wasn’t much of an imposition, he continues. Gribb compares the side effects of donating with the soreness he might feel after a football game or a hard workout, or perhaps some mild flu-like symptoms. “I still went to class; I didn’t participate in football practice, but I still went,” he says. “I was back to practicing football a week after, and played in the game that Saturday.”

When people donate stem cells the way Gribb did, via a machine that collects the cells, they first take injections of filgrastim for five days, which ramps up their production of stem cells. That’s what causes the achiness and bone pain that Gribb experienced, Halet says.

Gribb graduated from Villanova in May 2016 and is now studying at the University of Kentucky College of Dentistry. Coincidentally, he received his white doctor’s coat from the university in a ceremony that occurred on Sept. 30, the anniversary of his stem cell donation. “It’s kind of a special day for me now,” he says. Gribb remains in the Be The Match database, in case he’s ever found to be a match for another patient in need. And he’s been told by his Be The Match donation coordinator that the patient he helped is alive. He hopes that, someday, they’ll meet. “Of course, I’d love to meet him and just thank him for continuing the battle — or, if he’s cancer-free, to thank him for being so strong and persevering through it all,” Gribb says. “I’d like to know he has a happy life.”

Another method of collecting stem cells is to take liquid bone marrow out of a donor’s hip bone, which is done under anesthesia in a hospital operating room. Most often, children receive donated stem cells from bone marrow because the risk for GVHD is lesser.

While some TV shows and movies have portrayed this procedure as very painful, it’s simply not, Halet says. “Most donors go home the same day,” she says. “They might feel really sore on their backside, and stiff, but no one’s crying out in excruciating pain — not even close. Many are recovered within a week and back to normal activities.” And employers are often very supportive about offering donors time off, she says, because “they’re really proud and honored to have someone in their company donate.”

Be The Match covers all medical expenses for donors, Halet adds; a donor’s insurance is never billed.

Yet, still, some people who learn they are matches for patients in need end up changing their minds about donating; for that reason, Be The Match urges that those who undergo cheek swabs do their best to retain their long-term commitment to the process.

For Gribb, following through was a no-brainer.

“During the process (of donating), I asked a nurse,‘What would happen if I didn’t do this, if I decided today?’” Gribb says. “She looked at me and said, ‘This person would die within 24 hours.’ I said, ‘Whatever you need — let’s do it.’” For those who do get the opportunity to donate, the experience changes life for the better, Halet adds.

“I was a donor in 1993, and it changed my life dramatically,” she says. “Every donor I’ve ever spoken to has found it to be one of the best experiences of their life, the honor that they have in being able to help somebody in ways that nobody else can. I’ve always believed that the patient’s life changes on transplant day, but so does the donor’s.”

Gribb likes to think of it from the point of view of someone who loves the patient seeking a donation.

“If it was your own cousin, friend or family member battling for life, you would want someone else to donate,” he says. At the very least, he urges young men to share information about the “Be the Guy” campaign on social media.

How to Improve MPN Treatment Via Symptom Management and Risk Stratification
By: Brielle Benyon
External Resources