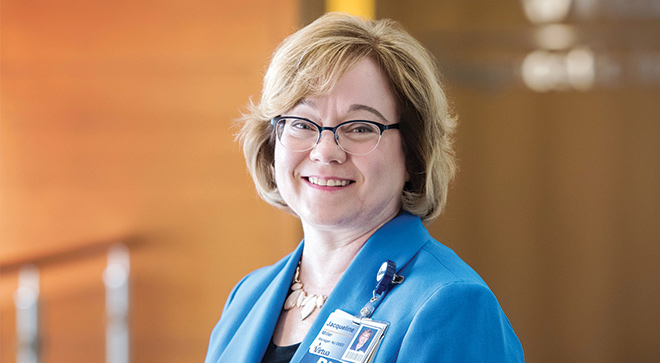 Jackie Miller, BSN, RN, OCN, was 8 years into her career when she was tapped to join other handpicked nurses to staff a new unit dedicated to oncology. That was 22 years ago.

“We had identified that we needed this, and it was a core group [of nurses] who were known for helping patients with cancer,” Miller recalls. Because the nurses were all at different skill levels, they also helped each other.

Today, Miller manages the New Jersey Cancer Education and Early Detection Program, which provides health screenings for uninsured residents of Burlington and Camden counties. Overseen by her employer, Virtua Health System, the program operates using state money and grant funding secured through Miller’s efforts. “We have different avenues for different diagnoses, but in most cases, we can provide Medicaid in 24 hours,” she says.

Miller is recognized as someone who can solve a problem when she sees it, which is how Camp Oasis, created for the children of southern New Jersey residents diagnosed with cancer, came about. When Miller’s sister-in-law died from breast cancer a number of years ago, leaving behind a son, the family tried in vain to find support for the boy. “We were at Christmas dinner after she passed away, and we said, ‘This is crazy that there are no resources for families with small children,’” Miller recalls.

Miller envisioned a camp for kids like her nephew, and the idea snowballed. When the Oncology Nursing Society took applications for a special grants project, Miller applied for the funds to create her camp. After she won the grant, she found that her colleagues were poised to get behind her and volunteer to lend a hand. Then, as she began to put the idea into practice, she discovered that the whole community wanted to help.

“When I tried to get space, they ended up donating it. Then, when I went to buy food, they donated it,” she says.

Camp Oasis, which now operates through the Virtua Foundation, provides a magical day for approximately 50 participants. The campers, aged 8 to 18, get picked up in the morning by limousine—a nurse rides along, just in case—and receive a bandana. After the opening ceremony, the campers are divided into 5 groups based on bandana color.

The children take part in all kinds of activities, including sports, crafts, and a group meeting with social workers who can help the campers open up about their fears. “The social workers are trained in this area to help the children talk to their mom or dad about what is happening,” Miller says.

Last year, a winter camp was added and offered 5 indoor sessions, including playtime with oversized Legos, theater improvisation, and activities at the camp’s indoor waterpark.

At the end of the day, each camper leaves with a folder for their parents that offers information about support groups and provides the phone number for a crisis hotline in case of emotional trouble.

“They are not alone,” Miller says of the children. “By the time they are in the limos going home, the kids are texting each other and getting phone numbers.”

Miller was nominated for a 2018 Extraordinary Healer® award for Oncology Nursing by her colleague, Randi Solden, BS, RN, OCN, and honored as a finalist by CURE®, a sister publication to Oncology Nursing News®. Miller continues to work to provide emotional support for the children of southern New Jersey residents diagnosed with cancer.

Mindfulness Can Help Patients With Cancer