The year 2014 was distinguished by dramatic progress in cancer care, perhaps nowhere more so than in the treatment of blood cancers.

The year 2014 was distinguished by dramatic progress in cancer care, perhaps nowhere more so than in the treatment of blood cancers. The FDA granted approval to several new agents and indications in this setting, including four for the treatment of chronic lymphocytic leukemia (CLL) alone—a transformation of treatment for the most common form of adult leukemia that earned it the American Society of Clinical Oncology’s inaugural “Cancer Advance of the Year.”

Over the course of the year beginning in late 2013, the antibodies obinutuzumab (Gazyva) and ofatumumab (Arzerra) were approved in the frontline setting, while the small-molecule inhibitors ibrutinib (Imbruvica) and idelalisib (Zydelig) gained approvals for resistant/relapsed CLL.

“These new therapies fill an enormous need for thousands of patients living with CLL,” said Gregory Masters, MD, ASCO expert and coexecutive editor of the report. “For many older patients, especially, these drugs essentially offer the first chance at effective treatment, since the side effects of earlier options were simply too toxic for many to handle.”

“I’ve seen a revolution in how the patient is treated from when I started 20 years ago,” said Michelle Gervino, RN, BSN, OCN. “With biotherapies, with targeted therapies, you’re not seeing the devastation in patients who are very, very sick.”

The side effect profile with many of these newer agents is more tolerable, and Gervino said that once patients get over their fear of the unknown, “They will get up and say that wasn’t that bad.” As an example, noted Linda Casey, BSN, OCN,“ I frequently tell patients when they come in for Rituxan, it’s not like a wildfire burning down the forest to get to one tree. It finds the tree that it needs to take down, and it takes it down.”

In today’s environment, patients come in, get their treatment, and then get on with their lives, Gervino said, adding that one of the benefits of working in this setting is that nurses really get to know their patients, seeing some of them for years. “Cancer is becoming more of a chronic illness, as opposed to a terminal illness,” her colleague, Jenna Forsythe, MSN, RN, OCN, concurred. Now, many patients with these cancers are on maintenance therapies and have the “good” problem of trying to find that balance of working and taking care of their children—no longer having to focus solely on their cancer.

All three of these oncology nurses work in the outpatient setting at the John Theurer Cancer Center (JTCC) in Hackensack, New Jersey, where part of their work includes supporting research nurses and their patients who are participating in clinical trials testing the efficacy and tolerability of new agents for treating hematologic malignancies.

The first of the four CLL agents approved over 2013/2014 was the anti-CD20 agent obinutuzumab.

In November 2013, the FDA approved the drug in combination with chlorambucil as a first-line treatment regimen for patients with CLL based on data from the phase III CLL11 trial. In the study, the obinutuzumab/chlorambucil combination significantly reduced the risk of progression by 84%, compared with chlorambucil alone. The approval came with a Boxed Warning, similar to other monoclonal antibodies in this class, regarding the hepatitis B reactivation and progressive multifocal leukoencephalopathy, a rare disorder affecting the brain. In December 2014, the FDA updated the label for obinutuzumab plus chlorambucil to include data from stage 2 of the CLL11 study, which detailed an unprecedented 11.8-month improvement in progression-free survival (PFS) compared with rituximab (Rituxan) plus chlorambucil as a frontline treatment for patients with CLL (26.7 months vs 14.9 months).

The next new option approved for patients with CLL was the BTK inhibitor ibrutinib in February 2014. The FDA approved the agent for patients with CLL who have received at least one previous therapy. The decision was based on data from 48 patients enrolled in the single-arm phase Ib/II PCYC-1102-CA study. At a median 15.6-month follow-up for this group, singleagent ibrutinib produced an overall response rate (ORR) of 58.3% (all partial responses) with a duration of response of up to 24.2 months.

In July 2014, the FDA expanded the approval of ibrutinib to include the treatment of patients with CLL who harbor a 17p deletion, based on findings from the phase III RESONATE trial.

In RESONATE, ibrutinib lowered the risk of progression by 75% in patients with CLL who harbored a 17p deletion and by 78% in the full population of the study when compared with ofatumumab.

The anti-CD20 agent ofatumumab, which received a new indication in April 2014, marked the third new CLL treatment option made available in the past year. The indication is for ofatumumab plus chlorambucil for previously untreated patients with CLL who are considered inappropriate for treatment with the chemotherapy fludarabine. The FDA first approved ofatumumab in October 2009 for the treatment of patients with CLL who no longer respond to chemotherapy.

Rounding out the impressive 2013/2014 breakthroughs in CLL care was the July 2014 approval of the PI3K-delta inhibitor idelalisib in combination with rituximab for patients with high-risk relapsed or refractory CLL. The approval was based on the phase III Study 116 trial, in which the addition of idelalisib to rituximab improved overall survival by 72% and PFS by 82% versus placebo and rituximab. The approval for idelalisib included a Boxed Warning regarding fatal and serious liver toxicity, diarrhea, colitis, pneumonitis, and intestinal perforation associated with the drug. To address concerns with these side effects, idelalisib was also approved along with a Risk Evaluation and Mitigation Strategy (REMS).

“This has truly been a banner year for CLL and for clinical cancer research as a whole,” ASCO president Peter P. Yu, MD, said. “Advances in cancer prevention and care, especially those in precision medicine, are offering stunning new possibilities for patients.”

These treatment advances, along with promising findings for new targeted agents and combinations for multiple myeloma and other blood cancers reported at ASH, makes supporting patients today with hematologic malignancies an especially rewarding specialty for the nurses who treat them. “I enjoy working with blood cancer patients more than any other types of oncology patients,” said Casey, “because I think it’s a space where there is as much hope as you can get when faced with a cancer diagnosis.”

Louise Eaton, RN, BSN, OCN, works in the inpatient stem cell transplant unit at JTCC. Although not working directly with patients participating in clinical trials, “We do see the benefits,” she said, citing the example of a patient in her unit about to enter hospice who was able to participate in a trial of a research drug. “Now he’s in remission. You hear stories like that, and it’s amazing.”

“These patients have a lot of hope and do very well with many of these new therapies,” said Casey. Yet despite these advances, Gervino acknowledged that not all patients will have a favorable outcome.

“Nurses are on a journey with these patients. Our job is to give them dignity and provide the best care possible, no matter where the path takes them." 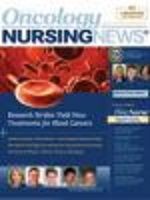