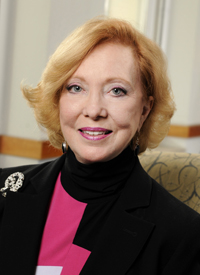 At the recent 2016 annual meeting of the American Society for Radiation Oncology (ASTRO), Oncology Nursing News had to the opportunity to sit down with Deborah Watkins Bruner, RN, PhD, FAAN, a leading nurse researcher at Emory University School of Nursing and the Winship Cancer Institute. At ASTRO, Bruner presented the results of a trial comparing the patient-reported quality of life outcomes in 2 treatment arms—one where patients received conventional radiotherapy 73.8 Gy in 41 fractions over 8.2 weeks), and one requiring one-third of the treatment time, known as hypofractionated radiotherapy (70 Gy in 28 fractions over 5.6 weeks).1

In this interview, Bruner discusses the particulars of the trial, the treatment itself, and the implications the results have for men at low risk of prostate cancer, especially with respect to financial burden.

Please describe the NRG Oncology/RTOG 0415 trial.
We presented on the patient-reported, quality-of-life outcomes of an NRG Legacy RTOG trial. The parent trial looked at what we called noninferiority between 2 treatment schedules of radiation therapy for men at low-risk for prostate cancer. Last year, my colleague, Dr. Lee [W. Robert Lee, MD, professor of radiation oncology at Duke University School of Medicine], presented the disease-free survival results which showed that treatment on the hypofractionated arm was equivalent to treatment on the conventional fractionated arm.2

This time we looked at the quality-of-life results. The reason that’s important is when you move from conventional fractionation to fewer weeks of treatment but still get to about the same dose to kill the tumor, what we do is we increase the dose at each particular session. So on any given day, a patient receiving hypofractionated radiotherapy gets more radiation that day, than one on the conventional regimen.

When that happens, there’s always a concern that we’re not just hurting the tumor cells, but we might be causing normal tissue toxicity, so the patients might see things like increased diarrhea, nausea. And, in fact, on the treatment trial that Dr. Lee reported last year, the clinician-reported grade 2, mild, gastrointestinal toxicities, (eg, diarrhea, nausea), were slightly elevated, compared with the conventional, longer treatment arm.

In this part of the study, we examined whether patients could discern any difference between what [side effects] the physician was grading and what they were feeling. We found that patients could not tell any difference between whether they were treated with a lower dose per day on the longer trial or higher dose per day on the shorter trial. That suggests that these 2 treatment arms were equivalent.

What is the benefit of having this shorter therapy?
There’s a huge benefit to patients, and this trial should be practice-changing, because there’s been now enough evidence—finally—that shows that the hypofractionated approach is a viable, safe, value-added alternative for patients with low-risk prostate cancer.

Men with low-risk prostate cancer actually have multiple treatment options. One of them is watchful waiting or active surveillance, but for a lot of men, actually, it’s very hard to think of having cancer and doing nothing; they want preemptive treatment. And while their survival will be the same either way, psychologically, some patients feel much better if they’re proactive and do something. Those men with early-stage disease who cannot live with active surveillance can opt for surgery or radiation therapy. And radiation therapy can be delivered in multiple ways.

This trial shows that we can really cut back on treatment and give these men the exact same outcome with shorter treatment, and no increase in bowel problems or urinary problems—no difference at all. And, hypofractionation costs less, in terms of having to take off work to go to treatment and/or having a family member take the patient to therapy. The approach takes 2.5 less of time, energy, money, parking, parking fees, babysitters, etc. That’s really important.

We’ve also come to learn, and we’ve known this for some time but there’s a great deal of research emerging now, that in addition to the standard side effects of diarrhea and urinary urgency or incontinence, there’s another toxicity that we have to be concerned about, and that’s financial toxicity.

The cost of healthcare is very high, and the cost of copays to patients has gotten very high. Not just for this treatment, but for all treatments. So it’s really important to the medical community to do the very best that they can to give the best value care at the lowest cost. And that’s what this trial has been able to show: we can do that with hypofractionated radiation therapy for low risk prostate cancer.

What is the aftercare for this treatment?
After any treatment, there’s continuous monitoring of the cancer itself to make sure there’s no recurrence. Erectile dysfunction might be an issue, where men want to see their physician for one of the PDE5 inhibitors, for example, Cialis, Viagra, etc. There are other options for erectile dysfunction as well. And they need to see a doctor before they go on those medications as well because they can have side effects. Everything comes at a cost; even the approaches we use to treat side effects may have side effects of their own.

There may be issues related to some burning when urinating or having a bowel movement; bowel movements may be more frequent. There are medications that can treat these these symptoms, and they need to be discussed with a nurse or physician.

What is the oncology nurse’s role in recognizing the side effects?
Nurses play a huge role. From the very beginning they help clarify the discussions with the physician about what the treatment options are. Being knowledgeable that hypofractioned radiotherapy is a practice-changing option for patients is very important for nurses. Although the side effects were equal on both of these arms, nurses can help to ensure patients are aware of the potential side effects.

Conducting preemptive assessments is also really important. This issue of financial toxicity is huge. Knowing what the copays are, knowing the extent to which patients can afford time off from work, for example, and then really helping them choose wisely that fits their lifestyle and financial environment. There are studies today that show that for some cancer patients, financial toxicity is actually associated with early death. Because patients may forgo other medications, they may forgo eating right, they may forgo paying their mortgage—the stress of that is terrible.

Nurses are on the forefront of being able to discuss these things with patients, make appropriate referrals to financial services, to social work, and, again, making patients aware that there are treatment options that are less costly and have equally good outcomes.

What should oncology nurses and other clinicians be aware of moving forward?
This does not stop here. There are multiple studies being presented at the ASTRO meeting about other treatment modalities in addition to this one, including other hypofractionated schedules that still need to be tested in this patient population such as 60 Gy in 20 fractions. We are still continuing to push the envelope. We do not sit on our laurels now that this study is done.

Before we change practice, we are very rigorous about our science. So we never change practice base on a single trial. We need a mountain of evidence to show that what we do is both effective and safe for the patient. We now have that mountain of evidence behind hypofractionated radiation for low-risk men. Even though we have that evidence, that doesn’t mean we stop. It means we keep trying to push the envelope, to go to less treatment, fewer symptoms, lower costs, and get a good outcome. References
1. Bruner WD. NRG Oncology/RTOG 0415 phase III noninferiority study comparing 2 fractionation schedules in patients with low-risk prostate cancer: prostate specific quality of life results. Presented at: 2016 ASTRO Annual Meeting; Boston, Massachusetts, September 25-28, 2016. Plenary session PL 01.
2. Lee RW, Dignam JJ, Amin MB, et al. Randomized phase III noninferiority study comparing two radiotherapy fractionation schedules in patients with low-risk prostate cancer. J Clin Oncol. 2016;34(20):2325-2332.