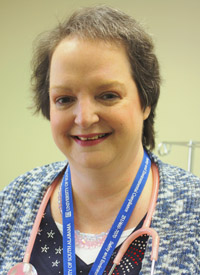 Donna Clark, RN, BSN, OCN
Donna Clark, RN, BSN, OCN, is a certified, well-seasoned, oncology nurse, but was new to role of oncology patient when she was diagnosed in 2014 with advanced endometrial cancer, now in remission. This "dual citizenship" has deepened her empathy and resolve to inspire nurses and their oncology patients. She believes God charted her course as a youngster, including caring for both parents who had cancer. As a clinic nurse at Mitchell Cancer Institute in Fairhope, Alabama, she is also active in the Oncology Nursing Society as a leader in her local NW FLA ONS Chapter. Follow Donna on Twitter @lynnm7417 and LinkedIn (https://www.linkedin.com/in/donna-clark-8b75522a/)

Medical Aid in Dying in the 50th State

“Life is meaningful because it is a story...and in stories, endings matter.” Atul Gawande

Having seen hundreds of patients through the end of their lives, Hawaii oncologist Charles Miller, MD, is pleased about finally being able to help his Hawaiian terminally ill citizens access medical aid in dying (MAID) as of January 1, 2019, when Hawaii’s Our Care, Our Choice Act went into effect.1 His firm belief in end-of-life options comes from his more than 40 years as a medical oncologist.

“In taking care of dying patients for a long time, I always felt like a patient should have a say in how their life ends. Once you’re an oncologist it takes some years of maturing to put into perspective that it’s not the right thing to always treat; sometimes it’s best to stop treatment. It takes a while for all doctors to get used to that. In general, the patients know exactly what they want. I believe it should be our job as doctors to support our patients in their end-of-life choices, whatever they are,” Miller said at the National Comprehensive Cancer Network’s (NCCN) State Oncology Society Forum in Orlando, Florida.

As a member-at-large of the Hawaii Society of Clinical Oncology, Miller explained this to the audience of various healthcare professionals (including myself) at the conference. He explained just how important it is for individuals and for other American Society of Clinical Oncology (ASCO)- affiliated state oncology societies, like his, to be fully engaged in end-of-life care choices that their patients have to make. Miller has been proponent of his state’s MAID legislative process for 20 years since its beginnings as a legislative think-tank idea in 1998. He came out of retirement to work for Hawaii’s Kaiser Permanente as an attending physician for the patients wishing to use medical aid in dying, and to mentor other physicians in these brand-new processes. He’s actively involved in the law’s implementation and integration processes since its passage through the state legislature in April 2018, and signage into law by Governor David Ige.

“We finally did it,” he says, “I suspect that in a year or 2, no one will bat an eye about it. But these steps are still a big challenge. My greatest satisfaction is that I will be able to write my first prescriptions to patients who request this medical aid in dying. My belief is that patients have a right to choose how, when, and where, they die. That’s as much of a right as anything in the Constitution, as far as I’m concerned.”

MAID is not suicide. It is a process in which a terminally ill individual can request from their physician a prescription for medication to self-ingest to bring about a peaceful death. In Hawaii, the Our Care, Our Choice Act statute specifies that for a Hawaiian citizen to qualify, he or she must be over the age of 18; mentally capable of making sound medical decisions; terminally ill with prognosis of less than 6 months to live; and physically capable of acting voluntarily to self-administer the terminal drug, and it also includes the following patient protections:

“1. Confirmation by two healthcare providers of the patient's diagnoses, prognosis, and medical competence, and the voluntariness of the patient's request;
2. Two oral requests from the patient, separated by not less than fifteen days, and one signed written request that is witnessed by two people, one of whom must be unrelated to the patient;
3. An additional waiting period between the written request and the writing of the prescription;
4. The creation of strict criminal penalties for any person who tampers with a person's request for a prescription pursuant to this Act; or coerces a person with a terminal illness to request a prescription;
5. In addition, the patient at all times shall retain the right to  rescind the request for medication and be under no obligation to  fill the prescription or use the medication.”2

Currently, there are a few other states besides Hawaii and the District of Columbia that have MAID legislation in effect: Oregon, Washington, Montana, Vermont, California, and Colorado.3 As of March 25, 2019, New Jersey’s State Legislature passed this legislation and it will soon go before their governor Phil Murphy for his review and signage.

Nationwide Professional Associations’ positions on MAID vary. Examples are as follows: American Academy of Hospice and Palliative Medicine is neutral, while the American Medical Association is opposed, and the Health Professionals Advancing LGBTQ Equality (GLMA) are in favor of it. The Hawaii Society of Clinical Oncology’s position is one of helping Hawaii’s cancer specialists be ready and able to support their patients’ decisions as they consider their full range of end-of-life care options, and the decision for medical aid in dying should be made within the context of the patient-physician relationship.

A landmark initiative for addressing end-of-life care was published in September 2014 by the Institute of Medicine (IOM) called Dying In America.4  It makes suggestions for clinicians to improve evidence-based end-of-life care including stressing accurate information so patients and physicians together can make informed decisions about the best individual choices for them.

Personally, I am unique in my perspective with a dual citizenship as a seasoned oncology nurse and a patient with stage IV recurrent metastatic endometrial cancer. I am currently on palliative, not curative, maintenance chemotherapy. My long-term prognosis is guarded, so would I consider this option for myself as my condition eventually becomes terminal?

First off, I do not live in a state where MAID is legal, but even if it was, I wouldn’t choose it, because of many reasons, including religious ones. But I would still support, on a very personal and professional level, that person under my care accessing MAID, if it were legal in my state. It’s about having so much empathy, integrity, and being supportive of your fellow oncology patient during their great time of need, even though you may not agree personally with their decisions. Freedom of choice is so paramount in end-of-life care, and one’s wishes should always be respected in this most personal of all choices one ever has to make, and ethics always demand that respect.
“One does not ask of one who suffers: What is your country and what is your religion? One merely says: You suffer, and that is enough for me; you belong to me and I shall help you.” Louis Pasteur, MD. 1886

Discussions >>
Talk about this article with nurses and others in the oncology community in the General Discussions Oncology Nursing News discussion group.
More from Donna Clark, RN, BSN, OCN
Learning Resilience From My Patient
Retired nurse Jean Reno navigates complex recurrent breast cancer thru optimism, humor, realism, and service to others.
PUBLISHED: Fri January 25 2019
By Our Sides: When Oncology Patients Provide Care to Their Nurses
"You treat a disease, you win, you lose. You treat a person, I guarantee you, you'll win, no matter what the outcome." - Robin Williams as Dr. Patch Adams
PUBLISHED: Fri April 06 2018
Seasoned Nurse and Cancer Survivor Advocates for Quality Cancer In Our Nation
I was chosen by ONS to serve as one of its first-time oncology nurse advocates for the 2017 ONS Capitol Hill Days conference held Sept. 6-7 in Washington, DC., representing ONS and my Northwest Florida ONS Chapter.
PUBLISHED: Thu October 19 2017
Conquering Cancer's Boundaries With Friendship
I wanted the world to recognize my chemo nurse, Wanda Greeley's strong commitment to me and all her other patients with cancer.
PUBLISHED: Wed June 14 2017
External Resources