In patients with chronic lymphocytic leukemia (CLL) or small lymphocytic lymphoma (SLL), high doses of curcumin and vitamin D could help stabilize the disease, according to new research presented at the 2018 American Society of Hematology’s Annual Meeting in San Diego.

In patients with chronic lymphocytic leukemia (CLL) or small lymphocytic lymphoma (SLL), high doses of curcumin and vitamin D could help stabilize the disease, according to new research presented at the 2018 American Society of Hematology’s (ASH) Annual Meeting in San Diego.

Both types of non-Hodgkin lymphoma, CLL/SLL are similar, slow-growing diseasse in different locations of the body: in the blood and bone marrow in CLL, and the lymph nodes in SLL. As the researchers noted in their study, most current treatments for CLL/SLL are non-curative and have frequent toxicities. Several trials have also indicated that early treatment does not guarantee longer overall survival.

Previous clinical studies have shown that curcumin, a chemical derived from turmeric, and vitamin D are both safe in high doses for patients with solid tumors. Additionally, the research presented at ASH notes that curcumin has been found to disrupt CLL cell interactions, induce cell death independent of DNA damage and upregulate vitamin D receptor levels in malignant cells.

Given this, the researchers set out to examine whether the combination of curcumin and vitamin D could safely delay disease progression in patients with CLL/SLL. In their phase II, open-label trial, the team enrolled a total of 35 previously untreated patients with asymptomatic, stage 0 to 2 CLL/SLL.

Patients received a median of 5 cycles, and the treatment was well tolerated. The most frequent side effects were diarrhea/gastrointestinal upset in 69% of patients, 14% of which experienced this at a grade 3.

Eighteen patients completed all 6 cycles, while 10 withdrew consent, 4 discontinued treatment due to adverse effects and 3 patients’ disease progressed while on treatment.

While no responses were seen, the majority of evaluable patients maintained stable disease while in treatment.

The researchers concluded that because the combination of curcumin and high-dose vitamin D is safe and well-tolerated, additional extended follow up is now planned to examine how this treatment impacts the long-term progression of disease in patients with CLL/SLL.

Originally published on CURE® as “Curcumin and Vitamin D Treatment May Stabilize Disease in Patients with CLL and SLL.” 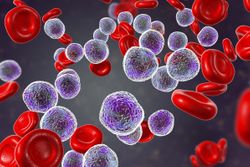