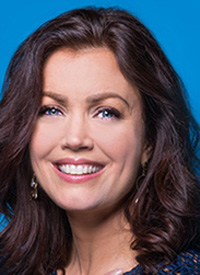 The lung cancer journey can be tough for both patients and caregivers, but advances in research, like the understanding of biomarkers, are offering new hope in the fight against the disease.

Helping patients to understand the information is the Test. Talk. Take Action. campaign that was developed by Merck in collaboration with six leading lung cancer advocacy partners: Bonnie J. Addario Lung Cancer Foundation (BJALCF), LUNGevity Foundation, Lung Cancer Alliance, Free to Breathe, Lung Cancer Research Foundation and Lung Cancer Foundation of America. Acclaimed actress and singer Bellamy Young, best known for her role on the hit television show Scandal, is also lending her voice to the campaign motivated by her own experience with lung cancer. Young lost her father to the disease in 1985 – just 10 months after his he was diagnosed.

“The discussions with doctors were few because we didn’t have the internet. We didn’t have a way of self-educating,” said Young in an interview with Oncology Nursing News. “There weren’t a lot of advocacy groups at that point, so we didn’t feel we had a community, and the doctors, honestly, didn’t know that much. So the answers we got were a little ineffective.”

It was a time where her family felt very alone, she said. However, she believes the campaign and its website will help patients, survivors and caregivers feel supported on their journey. In addition to explaining biomarkers, the website has a printable worksheet with questions that patients can ask their physicians and links to all of the advocacy groups involved. “It’s your fundamental right to empower yourself with as much knowledge as possible, and then have as free and in-depth dialogue as possible with your doctor to get the most perfectly honed treatment for you that’s available today,” Young said.

Helping to empower patients through the campaign is Suman Bannur Rao, M.D., a medical oncologist at MedStar Franklin Square Medical Center in Baltimore, who advised how important it is for patients to have discussions with their physicians. “It can be difficult at times because on that first visit, you get so much information,” she said. “You are so concerned about the diagnosis, the prognosis and so much information presented is confusing. So it is always good for patients to look at information beforehand and that’s where the website is a great resource.”

Determining if a biomarker is present in a patient can help physicians in the diagnosis and in determining treatment. Biomarkers are substances that can be found in normal tissue as well as cancer tissue. Rao explained that sometimes they are products of gene mutations or sometimes they are proteins that are present in the cells that can either help the cells grow or help the cells develop certain mechanisms to prevent the body from recognizing the cancer and destroying it. “Treatment options can be much more targeted if we find a biomarker that is present in the cancer tissue. It gives us an idea of what might work best for the patient,” said Rao.

Biomarker testing is widely recommended in non-small cell lung cancer (NSCLC), which is the most common form of lung cancer, accounting for approximately 85 percent of cases. Small cell lung cancer accounts for the other 15 percent. There are more than 10 different biomarkers that have been described for lung cancer. Some that are most important to clinical practice currently, according to Rao, include EGFR, ALK and ROS-1. She added that PD-L1 is also being looked at as testing for it can help determine if a patient will respond better to immunotherapy.

Every cancer center tests for biomarkers differently. For some it may be routine, while in other places, a physician may have to specifically ask for it. Rao’s suggestion is for patients to ask and make sure it’s being done. Both Young and Rao feel that patients with lung cancer often self-stigmatize because of a history of smoking, but they agree this needs to end.

Rao added, “Nobody smokes with the idea that they want to get lung cancer. So while it is important to stop smoking, if you start to have any symptoms it’s always good to bring it to the physician’s attention as early as possible.”

“I believe mindset matters,” said Young. “If all we can do in talking about this and by driving people to the website is give them a clearer mind with which to walk forward on their path, then my little non-medical heart would be calm because I think it really makes a difference.”