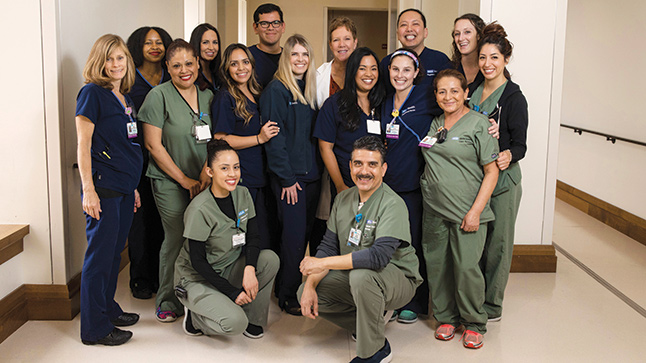 Nurses from the Santa Monica UCLA Oncology Unit who helped a patient say a special goodbye to his daughter.

"Tell me what you want the next couple of weeks to look like.”

Juan,* a 37-year-old construction worker, had been in and out of Jakel’s unit for months, receiving treatment for testicular cancer that included tandem stem cell transplants followed by chemotherapy.

Then, just a week before Christmas, he was readmitted with lung metastases. As he held Jakel’s hand, he asked if she knew how much time he had left.

“I know it’s not months,” she remembers telling him. That’s when she asked what he’d like to do in his final weeks. Patients sometimes want help writing a letter or creating a video for their loved ones. They may want to go outside, taste a favorite food, or witness a family milestone such as a birthday.

But not Juan. His wish list had just 1 item, and it was for his 6-year-old daughter, Sofia*: “I want to take her to Disney on Ice,” he told Jakel.

Neither Juan nor Sofia had ever experienced snow up close.

Wiping away her tears, she left his bedside to relay the request to Jason Kulangara, MBA, MSN, RN, the Solid Oncology Unit director. His immediate response: “We’ll make it happen.” They started lining up tickets and arranging for a 90-minute ambulance ride to Honda Center, the ice rink hosting the Disney show in Anaheim, California.

Word quickly spread around the unit, and staffers began contacting Jakel about donating funds for the trip. Jakel’s mind raced to add other nice touches to the plan: She would find a costume store that was open late and get Sofia a princess costume, as well.

When Jakel returned to work the next morning, however, all those plans came crashing down. Juan’s condition had plummeted overnight. He’d gone from needing oxygen to being on 100% high-flow oxygen.
“We told him Disney On Ice wasn’t going to happen. He was heartbroken,” Kulangara says. “He kept pushing it. I don’t think he understood: There was no ambulance company that would take him. The doctors thought he would never make it. He would probably die at Disney On Ice.”

Then Jakel voiced a seemingly preposterous alternative: “I said, ‘Could we get snow here?’” she recalls. “And we all chuckled.”

Yet, no sooner had those words been uttered than the joke instantly blossomed into Plan B.

Kulangara found a local ice company with a snowmaking machine that could chip 10 tons of ice into instant “snow.” The hospital’s chief exec­utive officer agreed to foot the $650 bill. The folks in security helped figure out truck access to an outdoor patio.

Juan was told of the plan and asked if he’d like some of Sofia’s young cousins to attend, too, so she’d have playmates in the snow. He said no, he wanted it to be just for Sofia and their family.

All the while, the staff knew the clock was ticking. Juan had been admitted to the hospital on a Sunday and went precipitously downhill that Tuesday, and the event was scheduled for Thursday, just 4 days before Christmas.

The magical day began with a friend of Jakel’s daughter showing up dressed as Elsa, the heroine of the movie Frozen. The normally talkative Sofia, who had been staying at the hospital round-the-clock with her mother, was tongue-tied with awe.

Next, Juan—dressed in a Santa Claus suit and with his oxygen tank and respiratory therapist at his side—was wheeled into a small courtyard to show his daughter the day’s second surprise: On a sunny day in Southern California, with the temperature a balmy 61°F, a giant mound of snow stood before her.

Staffers played in the snow with her, and those who grew up in colder climates taught the others how to make snowballs. Nurses who were off that day showed up at the hospital anyway, as did some who’d worked the previous night shift.

The next day, Friday, Sofia and her aunt attended Disney On Ice, with tickets provided by the hospital staff. That Monday—Christmas—as Sofia was home, awaiting the arrival of Santa, Juan died.

The whirlwind effort to fulfill a patient’s last wish was a restorative source of pride for the nursing staff, Kulangara says, noting that he has witnessed similar situations: “They jump on these opportunities to celebrate someone or to give them a positive experience.”

Although such efforts are geared toward the patient, the emotional benefits ripple out to touch the staff, too, Jakel says. “Last month we had 9 patients die and 20 sent home to hospice, and obviously that can affect the nurses,” she says. “That’s not sustainable for a lot of young nurses.” Impromptu events like Juan’s Snow Day help them recharge their batteries.

“We focus a lot on the medical side, but focus on the holistic side, the spiritual side, is important, too,” Kulangara says. “There’s a lot of sadness on this unit, but these little victories add meaning to what these people do.”

*Names changed.
Start a discussion
You must log in to use this feature, please click here to login.